She was forced to run countless laps. Whipped with an extension cord. Made to stand for hours at a time.

And her mother failed to put a stop to the abuse.

The last two months of two-year-old Tanilla Warrick-Deaves's life are outlined in an agreed statement of facts tendered in the NSW Supreme Court on Tuesday, where her mother, Donna Deaves, pleaded guilty to her daughter's manslaughter.

The little girl was left unconscious in a pram in her NSW Central Coast home for nearly two days after she was allegedly badly beaten in the shower by a man who cannot be named for legal reasons and who is due to stand trial for murder later this year.

According to the facts, Tanilla - described by grieving relatives as a "happy-go-lucky" little girl - ultimately died from blunt force head injuries on August 27, 2011 after Deaves finally called triple zero.

But the little girl had allegedly suffered agonising and severe physical abuse in the months before.

The man allegedly beat her up on several occasions, made the toddler stand unsupported for hours on end as punishment for soiling herself and constantly forced her to run laps of the lounge room, despite her suffering from bowed legs.

He whipped her with items including his belt, an extension cord, thongs, a broom and a hairbrush.

About a week before her death, the man allegedly told a friend, "I've hit her with an extension cord, a strap, a jug cord, a wooden spoon and she doesn't learn. Look I'll make her scream...", before he threatened Tanilla with his belt.

On August 25, he allegedly whipped Tanilla with a cord as she ran laps around the lounge room in the presence of Deaves before he put her under a cold shower.

He then banged her head against the shower glass until her mouth was bloody as the toddler screamed "no, no, no", the documents said.

Deaves told police she tried to intervene but the man slapped Deaves across the face before he held Tanilla upside down over the toilet bowl and threatened to put her head in the water.

He then allegedly kicked the little girl across the hall, causing her to hit her head against some cupboards.

After placing the unconscious child in the pram, Deaves said she came to the view that the little girl was brain damaged and was not going to wake up.

When asked by police why she did nothing, Deaves said, "It was a bit late", adding she thought Tanilla would be better off dead than to have lived as a vegetable.

But the doctor who performed a post-mortem examination said Tanilla "may well have survived if she had received prompt medical treatment". 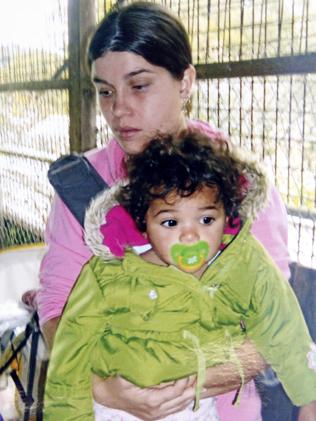 Deaves has pleaded guilty to manslaughter on the grounds of criminal negligence.

She will face a sentence hearing in September.

Two-year-old Tanilla Warrick-Deaves was found suffering several injuries in the early morning of August 27, 2011, at a house in Stonehaven Avenue, Watanobbi, and died in Wyong Hospital soon after.

"It wasn’t just the last two weeks of her life ... she had 33 reports on her and she was only two-and-a-half. Alarm bells, hello?"

In the NSW Supreme Court on Tuesday her mother, Donna Deaves, 29, pleaded not guilty to murder, but guilty to manslaughter.

Wearing a brown jumper and a collared shirt, Deaves stood and entered her plea in a clear voice.

Crown prosecutor, Terry Thorpe, accepted Deaves' plea on the basis of "criminal negligence in that she did not get medical assistance for the deceased".

Soon after Tanilla died, police said they wanted to speak to anyone who may have known the toddler was being abused before her death, after a post-mortem examination showed "she did not die of natural causes".

"It wasn't just the last two weeks of her life she was being reported. She had 33 reports on her and she was only two-and-a-half. Alarm bells, hello?

In a statement, a FaCS spokesman said the department was "deeply saddened by the tragic case of this little girl".

But there would be no further comment until Deaves' court case, and related cases, were finalised, the spokesman said.

Deaves was first charged with being an accessory to murder but after continuing investigations, police upgraded the charge to manslaughter, then murder.

A co-accused, who is awaiting trial, is charged with the girl's murder.

"We never had a problem with her. She was happy, she loved everybody. She was a happy-go-lucky little girl."

She said Tanilla's father, Adrian Warrick, was not coping well.

"He's an emotional wreck. He can’t face Donna at the moment.

"He's getting better and as long as he's in the right frame of mind ... to get well for himself ... so we can carry on and get justice for Tanilla because that’s what it’s all about."

Deaves will face a sentence hearing in September.

The girl's family has given permission to identify her.

If this were in fact true poor little Tanilla would be alive today. Have a long hard think about it!

By:Kurt from NSW, AUSTRALIA on October 10, 2013 @ 6:33 pm
There is more to this story then people know and for legal reasons untill after court proceedings finish will not be told Adrian and the step mother did all they could and was forced to hand her back to the low life mother by Docs .. Moses you sit in judgement over somebodies hair are you for real this woman has been that little girls voice since day 1 and the ONLY one that has been especially when Adrian wanted to give up on life you know nothing did you stop to think that things can not be fully said due to court proceedings SMH my hat goes off to the Step mother and Tanilla's Father sending love and prayers to them for the next trial this month then when it's all over all will be told. R.I.P princess Tanilla

By:Johnny from NSW, Australia on July 12, 2013 @ 1:17 pm
Was the real dad ousted or did he leave?
Did he get to have time with his daughter?
Wonder what he's got to say about all this?

By:Samantha from Sydney NSW, Austalia on July 10, 2013 @ 8:47 pm
understanding, acceptance & forgiveness is key to healing for all in these situations

By:Moses from QLD, Australia on July 10, 2013 @ 9:48 am
The step mum doesn't impress me all that much. Where was she when Tanilla needed her? Too busy at the hairdressers by the looks of things.

By:MrNatural from Vic, Australia on July 10, 2013 @ 8:01 am
A hanging (by a jug cord) is possibly in order from what has been said above about the abuses perpetrated by Mr X, whose name will be revealed to us shortly. Although no excuse for the mother's part and possibly inaction in the death of her child, absolutely not, from the photo above it looks like the mother isn't quite right and has possibly been abused herself.

But also and equally important if not more, are the abusers at Family and Community Services (FaCS) that need to be hanged for also being complicit in the murder of this loving and innocent child that needed protecting, not torture. 33 times... come on.

A normal family member would have surely taken Tanilla away from harms way if they truly cared for her safety, but knowing the system and many of it's useless mechanisms, the people trying to do what was instinctually right would have possibly been reprimanded by the system. Possibly a very untenable position, but safety should have come first to keep this little girl safe, no matter what the consequences.

This is not the first time a welfare division has been involved in deaths, and what the public require are open transparent answers that show directly responsible people are made accountable.

Here's how it goes (very simple for those in power unable to understand a basic concept):

1) Parents have No 1 responsibility (even in Separation/Divorce)

3) All remaining children without a caring, loving and safe person will be looked after by a place called Child Town, an F4J Foundation for the homeless. A model based on the 1938 movie Boys Town with Spencer Tracy.

4) All people with a good heart will be attracted to Child Town where the community will help provide funds and necessities.

5) No government control save by wish of the people!