Ernie's been thrown in the BRIG, again!


Article Date: 28 Jan 2014
The self-proclaimed natural man has once again been found in contempt of court and taken to jail.

Ernie Wayne terTelgte, 52, appeared in Gallatin County Justice Court briefly Monday afternoon for an omnibus hearing. Judge Rick West asked terTelgte to remove his three-cornered hat in the courtroom. TerTelgte refused to do so and launched into his “Natural Man” speech. After asking the defendant to stop speaking three times, West held him in contempt of court and ordered sheriff's deputies to haul him to jail for 30 days.

The whole encounter lasted less than one minute. Judge West ordered that no cameras or recording devices be used in the courtroom. Anyone caught using the electronic devices would also be held in contempt of court, West said.

TerTelgte was slated to appear for the omnibus hearing in connection with a Nov. 18 incident in which he was charged with resisting arrest. Charging documents from Nov. 18 state a sheriff's deputy saw terTelgte in the Law and Justice Center and recognized him. The deputy was also aware that terTelgte had a warrant out for his arrest.

Deputy Matthew Boxmeyer tried to get terTelgte to put his hands behind his back so he could handcuff him. TerTelgte responded by telling Boxmeyer that he had no authority to arrest him. Three deputies took terTelgte to the ground and handcuffed him.

At terTelgte's initial appearance in Three Forks for fishing without a license, he insisted that he is “The Natural Man” and should have the right to forage for food for his family.

In a YouTube video recording from Jan. 22, terTelgte introduces himself as “the natural living man.” The video was posted to a Facebook page titled “Set free ernie tertelgte and find him NOT GUILTY!”

Gallatin County Undersheriff Dan Springer said law enforcement officials from other counties were not brought in to assist with court proceedings Monday. Two Bozeman police officers and eight sheriff's deputies were on scene at the Law and Justice Center. A metal detector was set up in front of Judge West's courtroom.

At terTelgte's last court appearance in November, 32 law enforcement officials from 10 different agencies showed up to keep the peace. TerTelgte was in court for fishing without a license.

After Monday’s hearing, terTelgte's friends and followers spoke brazenly outside the courtroom. 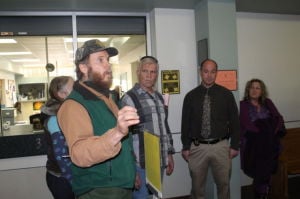 Joel Boniek, who referred to himself as an inhabitant of the state of Montana and friend of terTelgte, said the purpose of government is not to make citizens submit.

“You can go to jail simply because you don't take off your hat?” Boniek said. “That's bull-(expletive).”

Boniek went on to say that when government is abusing its powers, it should be held in check. Boniek was a candidate in the 2010 House District 61 Republican primary. He lost to John Esp of Big Timber.

“Good people must say something when the government is being unjust,” he said.

Friends of terTelgte have been holding what they call citizen grand jury meetings for the past few weeks at various locations around the valley. On Friday, the group will meet at the Garden Café in Manhattan. Steve McNeil, the man organizing the event, encouraged interested community members to attend.

McNeil did not elaborate about what the jury meetings entail but said he will be taking out ads in various papers to solicit interested jury members.

Through his court battles, terTelgte has garnered a loyal following of anti-government friends who want to keep the power of the courts and law enforcement in check. The pack says they are not a formal group and have not adopted a name.

Judge West did not indicate Monday whether terTelgte's case will proceed to trial without another omnibus hearing.

By:Willo from Tassie, Australio on February 20, 2014 @ 10:45 am
This guys a legend & hes been put in jail cos thats all this useless power structure does with people who are smart. Is there an update on this superhero anyone?

By:David Williams from SA, Australia on February 12, 2014 @ 9:34 am
Those seen working as judges in the US legal system are frauds and pirates, no doubt about it. Complete ignoramuses making a mockery of the rule of god's law. The only true laws are universal and natural laws which these judges constantly break every day. A day will come when these corrupt judges and officials will be arrested and man made political, legal and financial systems will collapse bringing the people back to a grass roots community level of love, togetherness and peace under the spirit of co-operation and good old fashioned common sense.

By:Richard from Victoria, OZ on February 11, 2014 @ 6:50 pm
The real test and solution for freedom and justice comes from how connected the people of the county/community are. Clearly no harm to anyone has been done and laws of nature govern Ernie's rights to fish. What happens to Ernie is the same for us all. Protecting Ernie is protecting ourselves. Ernie can't help himself behind bars - he needs the help of his community. It's time people woke up, stopped being apathetic and slothful, and took a stand. It's that simple!

As representatives of the community simply walk in to the Sheriff's office and request Ernie's release. Make the Sheriff aware that more and more people will attend upon the Office of the Sheriff until the release has been effected. Also remind the Sheriff to uphold his duty to serve the community, else he will be relieved from his post. The people will not take No as an answer. Do all this with love - not fear nor aggression. Regard it as a great bonding experience for the community bringing everyone closer together and stronger. It's time the community realise the people are in charge and have all the power. Police/sheriffs are merely agents of the people, no more. Actions speak louder than words.