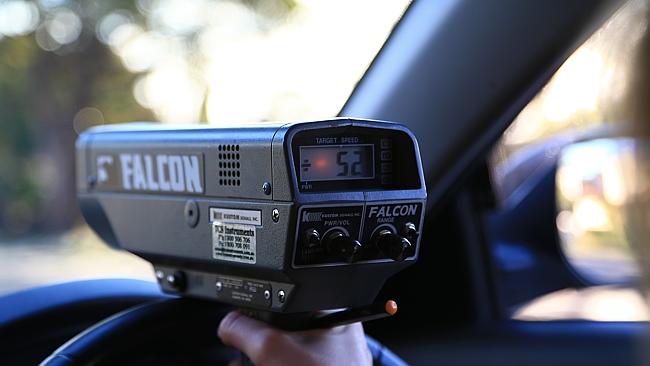 A police officer has said hiding away is worth sacrificing getting an accurate reading.
A TRAFFIC cop who told a court it was more important to remain hidden than to accurately detect speeding drivers has angered motorists.

Victoria Police has backed Torquay Sgt Dean Parello, who made the comments after nabbing a driver while concealed in a driveway behind a length of trees.

When being cross-examined by Mr Brown, Sgt Parello ­explained he would likely ­receive a more accurate reading on the radar if he were ­positioned directly behind the motorist than to the side.

When asked, “why were you so far away from the road if it doesn’t give as true a reading, why not be on the side of the road?”, Sgt Parello replied: “Because people would more than likely see me sitting there and slow down before I can get a three-second reading on them.”

Mr Brown then asked: “So, that’s worth sacrificing getting an accurate reading?”

Sgt Parello responded: “Yes, it is.”

Mr Brown was found guilty and handed a reduced fine after a magistrate found the reading was correct.

Acting Superintendent Dave Griffin said “covert activities” were among a range of options used by police in situations where safety or ­geography were factors.

Supt Griffin said although the angle of the vehicle affected the speed reading, “it is important to understand that cosine angle always favours the motorist” with the reading ­decreasing as the angle ­increased.

“Based on the information provided, Sgt Parello’s actions do not appear to warrant further action,” Supt Griffin said.

“The whole point, according to them, is to cause people to slow down to reduce accidents. But here you’ve got a clear-cut example that it’s got nothing to do with that at all. They don’t want people to slow down, they want to make money,” said Mr Palmer, a spokesman for Aussie Speeding Fines.

From the above I interpret this police officer was more interested in a speed measurement, possible revenue and additional income stream than actually slowing down and altering the motorist's behaviour for the sake of safety. A sad affair indeed, clearly reiterating what most of the public already know - that corporate cops are about $$$ + not keeping people safe!