The People Protesting at police getting away with murder. Kelly Thomas today — who will it be tomorrow?

The acquittal of two Fullerton, California police officers in the beating death of Kelly Thomas, a homeless man who was pummeled into a coma as he begged for his life, underscores the fact that cops now have a license to murder.

Thomas, a mentally disabled homeless man, was beaten, tasered, suffocated and pistol whipped as he lay on a street corner being sat on by no less than six police officers during an incident in July 2011.

In what is undoubtedly one of if not the most disturbing police brutality videos ever, Thomas can be heard pleading for his father, moaning, “Daddy, daddy, they are killing me,” as officers prolong the assault.

According to the jury in the case, who found officer Manuel Ramos and officer Jay Cicinelli not guilty on all charges of murder and manslaughter, Thomas just coincidentally chose to die of an undiagnosed heart condition in hospital five days after the beating having never regained consciousness.

Police claimed that the brutal pummeling they inflicted on Thomas, illustrated by shocking photos of his bloodied and swollen body, was a justified response to his pathetic attempts to resist being murdered.

“These peace officers were doing their job. They had no malice in their heart,” said John Barnett, an attorney for Ramos.

Ramos’ lack of malice was clearly evident during the encounter, when he grunts at Thomas, “You see these fists? They’re about to f**k you up.”


Claims made by police that Thomas was resisting because he was on drugs were disproved by toxicology reports which found no drugs in Thomas’ system.

“I’m just horrified. They got away with murdering my son,” Cathy Thomas, the victim’s mother, told reporters.

“This is carte blanche to police officers to do whatever they want,” said Ron Thomas, the victim’s father and a retired Sheriff’s Deputy.

The jury bought the argument made by the prosecution that a prostrate and unarmed Thomas posed a threat to six armed police officers, which as William Norman Grigg highlights, now means that any meager form of resistance against sustained violence metered out by police officers is justification for murder.

“John Barnett, the police union attorney who represented the killer cops, insisted that the beating was an appropriate response to Thomas’s pathetic, doomed struggle to save his life, writes Grigg, adding, “The jury validated the argument that the act of resisting such criminal violence is a capital offense worthy of summary execution.” 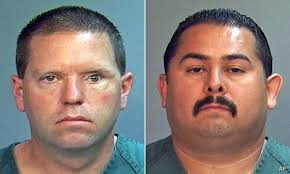 Although these two cops escaped a jail sentence by the corrupt system they work for it is clear in the minds of people that they are guilty as sin for the murder of Kelly Thomas and deserved to be sentenced to death by lethal injection, the electric chair or better still a public hanging.

Police are to protect and serve the people, especially the vulnerable, mentally ill and homeless like Kelly Thomas. Every day cops want to play the role of executioners when they know better is the day they must be extinguished, if not only to set a precedent and example to all police officers, 'peace men/women' and the institution from whence they came, that this will NOT be tolerated by the people no longer!

And don't give us, the people, any of that 'they were just doing their job' bulls*hit.

More importantly those at the top of the police training institutions need to be removed from public office and also placed on trial before the people. And who knows, maybe they too need to be hanged!

By:Glen Hair from Tasmania, Australia on February 8, 2014 @ 4:07 pm
how the fuk can coppers get away with this shit & bastardization!!!!....... everybody should dismantle such corrupt courts which arent their for its citizens. For every death on innocent people caused by coppers the cops should be hanged!

By:Mark Thomas from Qld, Australia on February 8, 2014 @ 9:48 am
This is an atrocious thing to happen to anyone but if he was mentally ill and the age of an 11 year old why was he on the streets left to fend for himself? Why wasn't he in proper accomodation or living at home with his father(former sheriff's deputy) and his mother?