Almost one million dollars in cash was found inside the false-bottom of a car fuel tank in Broken Hill in May. A ban on cash purchases over $10,000 is designed to fight tax evasion. NSW Police

Was KPMG's global chairman behind a secret plan to control the economy through a ban on cash purchases over $10,000?

Once again, Canberra is awash with wild theories about power, domination and control. This time, though, they originate outside Parliament House.

One of the biggest changes in the way regular Australians can use cash – a ban on most transactions over $10,000 – will be proposed to Parliament in coming months, according to Assistant Treasurer Michael Sukkar.

The plan is opposed by the Australian Chamber of Commerce and Industry, CPA Australia and the Australian Taxpayers Alliance, which regards it as an infringement of civil liberties.

But the most aggressive resistance – and possibly the most effective – has come from a notorious far-right political party, the Citizens Electoral Council of Australia, which has worked with a high-profile property pundit and an obscure economist to promote the idea that the anti-money-laundering measure is a profit-and-power grab by banks.

"It has drawn out the conspiracy theorists," says independent MP Andrew Wilkie. "There is a view that it's part of the grand conspiracy to control every aspect of your life, including transactions."

The campaign doesn't look likely to succeed. The Labor opposition says it is will probably support the law, which includes two-year jail penalties. With Labor support it would sail through the Senate.

But the policy has become a useful attention-grabbing tool for activists on the fringes of public life to promote extreme theories to eager audiences in the unregulated world of social media.

Backbenchers have received emails claiming they are being enlisted in a secretive plot by the shadowy bankers who really control the economy. Some of the communication has been so abusive that the Treasury Department has decided to withhold selective submissions from publication.

The $10,000 cash ban was proposed in 2017 by a taskforce headed by the late Michael Andrew, a former chairman of KPMG International. Looking for revenue to close the budget deficit, the Coalition government last year committed to implementing the rule, which is slated to come into effect on New Year's Day.

At first the change didn't get much attention. The rise of electronic payments had made cash redundant for many people, and the main group still relying on notes are older people and criminals. Only entities with an Australian Business Number would be covered; individuals would still be free to use unlimited cash to buy and sell things.

Andrew's committee estimated that up to 3 per cent of the economy operated outside the taxation system. It described it as an endemic cultural problem that fuelled the drug trade, sham contracting, corporate phoenixing, visa fraud, identity fraud and GST fraud.

Then, a little-known economist who had worked on the staff of Liberal Party senator Arthur Sinodinos six years ago, John Adams, and a prominent property bear, Martin North, began drawing attention to the plan through their YouTube show, In the Interests of the People.

The new restriction was an almost perfect fit for the banking-industry paranoia of the Citizens Electoral Council, the local offshoot of the American Lyndon LaRouche organisation, a proponent of the infamous theory that a global Jewish-led cabal controls the world's banking system.

The party embraced both North and Adams. North's public profile – he appeared as recently as Sunday on the ABC national news as an economic expert – made him a potent messenger. Adams' background in Liberal Party politics gave him credibility the CEC didn't have.

Adams agreed to appear on the party's regular internet TV show, and spoke at seminars run by the group in Perth, Melbourne and Brisbane. North invited a representative of the party to talk about the cash ban on his regular YouTube video, which usually focused on property prices, and praised the party's work.

The Citizens Electoral Council is pleased with the collaboration, and happy to confirm its connection to both men.

A spokesman said: "The CEC collaborates with Adams and North on our common ground – our concern that the financial system is based on a debt and real estate bubble which is heading for collapse, and the need for structural reform to the financial system, starting with a Glass-Steagall break-up of the banks."

On August 1, North published a video interview with CEC spokesman Robert Barwick. Both men alleged that cracking down on tax evasion was a ruse for a darker agenda.

"This is nothing really about the black economy," North said. "There is much more fundamental going on here."

"The vast majority of the activities that damage the economy are done by corporations, and they're assisted by these accounting firms, the big four," Barwick said. "Everybody knows this. Every scandal going back for decades has involved those firms giving banks, especially, and those corporations a clean bill of health."

The broadcast, posted on August 2, has been watched 138,000 times, making it one of North's most popular videos. The doubts raised by North and Adams were so effective that mainstream media outlets began to pick up the story, Adams says.

Property analyst Martin North became one of the most visible critics of the cash ban.

The ABC published an article on August 20 that said the change could create an "Orwellian state by giving authorities greater control over people's finances".

A week later it followed up with a report, citing Adams as the primary source, that suggested the policy was designed to allow the International Monetary Fund to influence the economy.

"As the Federal Government moves to ban cash transactions above $10,000, there's a theory gaining traction that the real motive for the cash ban isn't the so-called 'black economy', but rather to give authorities greater control over your behaviour during recessions," the article said.

A columnist for The Australian, Katrina Grace Kelly, echoed the argument, which asserts that restrictions on cash will coerce bank customers to keep their money in accounts even if deposit rates turn negative.

"Once it is passed, it is all over for the people of this country in terms of freedom and liberty," Kelly wrote on August 31.

Adams was delighted with the coverage, and North recorded a video predicting that other media outlets might follow.

"Journalists at the ABC watched our analysis and decided to report on the proposed legislation, given the strong public reaction Martin and I were able to generate with our reporting," Adams says.

The ABC points out that it also quoted other right-wing groups that oppose the change, including One Nation and the Institute of Public Affairs.

"The cash economy, the federal government's move to ban cash transactions above $10,000 and the prospect of ordinary Australians facing fines and jail time are matters of obvious public interest, and they are the only impetus for the ABC's reporting on this issue," a spokeswoman says.

Even if the cash ban is introduced, which seems likely, the debate has provided the CEC with invaluable publicity for fundraising, which is one of its core skills. Last year it declared an income of $1.8 million, a huge sum for a party with no MPs.

In Australia, Jewish groups have identified the party as a leading anti-Semitic organisation, which it denies. The Australia/Israeli Review described in August how the party operated an intelligence unit in the 1990s that maintained dossiers on Jewish community figures, including Frank Lowy, Richard Pratt, and Isi and Mark Leibler. 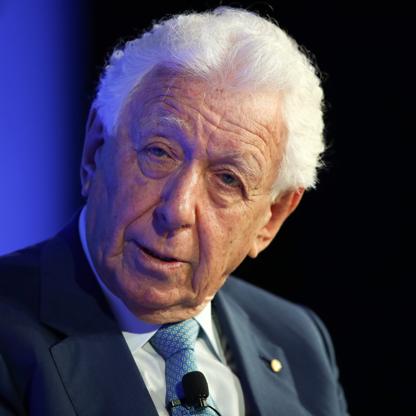 Frank Lowy was one of the Jewish leaders targeted by the Citizens Electoral Council. Rob Homer

"Members of this unit carried out surveillance, taped phone calls, filed reports and, adopting false identities, visited the offices of Jewish community, student and left-wing organisations, and covertly recorded the conversations they had there," the Review reported.

In 1978 a LaRouche publication asserted: “Adolf Hitler was put into power largely on the initiative of the Rothschilds, Warburgs, and Oppenheimers, among other Jewish and non-Jewish financial interests centred in the City of London.”

'They are right to call this out'

North says he condemns all racism. He says he hasn't seen any anti-Semitism in his contact with the party, which he argues defends individuals' rights.

"I have no affiliation or financial relationship with the CEC," he says. "I am not a member of any political party. I do, however, care about civil liberties. They are right to call this out."

Adams says he doesn't support all of the party's views and isn't a member. "I have only known the CEC at a personal level since February 2018," he says.

The cash ban will be put to Parliament in the current session, which is due to run until December 5, according to Sukkar's office.

As for whether it will allow government officials to control individuals' spending, independent MP Wilkie is doubtful, and he was a government whistleblower.

"No government I have seen is half enough clever to do that," he says.