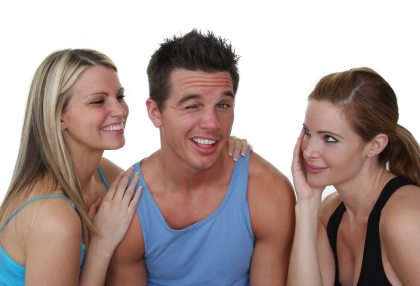 "Are women so insecure in the company of real men that they prefer emasculated ones?"

"Why are women these days so enamored with homosexual men?"

"There's a gay guy at my work who's totally obnoxious, self-centered, and spiteful, and yet all the female employees adore him. They're hover around him all day like groupies, hanging on his every word and laughing at his jokes."

"Are they just too stupid to realize he's a jerk, or are women so insecure in the company of real men that they prefer the emasculated ones? This seems to be the case everywhere."

Before I give my opinion, let's look at some of the explanations I found online.

1. Gay men are better friends: "Women love the fit, stylish, sensitive, sarcastic and supportive gay man. He looks good, listens to her and sympathizes. He is loyal to her (just not to his gay lover.) They are both superficial and get on like a house on fire.

2. Gay men are more fun! As one woman said, "All the out gay guys I have ever known are just plain fun to be around. They are sensitive, intelligent, creative, wonderful people, usually with a fabulous sense of style--everything a woman wants in a man..."

3. No pressure to have sex. Another woman said, "Straight women are tired of loser straight men always hitting on them and wanting to get into their jeans. Women know that this isn't an issue with a gay man, so they are free to let down their guard and enjoy themselves with guys who do not have an ulterior motive, or female genitalia on their minds." 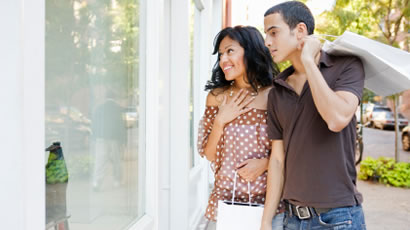 Attracted to gay male relationships. They are "equal" and the sex is hot: In the words of another woman, "the idea of two guys kissing makes me feel all warm n fuzzy inside! I just think its so genuine and attractive. And so equal. With girl/guy couples there's always that role thing going, and I always think the guy could easily end up being a 'traditional' male (i.e. NOT good!) but with gay guys they're so equal and lovey! They show their emotions and that's attractive in a man (though, I don't want floods of tears or anything!)

(In fact, gay male relationships are not equal, but mimic heterosexual relationships where the one playing the male role is dominant.)

According to a gay pop culture web site survey, half of the 2,000 women who answered found male homosexual relationships to be a "turn on."

Thirty-three percent like gay pairings because they "really enjoy love stories, no matter the gender of the pairing," while six percent say "It's unattainable for me and I love the fantasy."

It claims there are an unbelievable 117,000 websites about homosexual male relationships that cater to straight women.

Many women are simply aroused by the idea of two men together. Cheri told us: "I don't have any political reasons for enjoying gay couples on TV, movies and in books. I just like watching good-looking men, and the more the better."

These women love gay men because they affirm their own gender confusion and latent homosexuality (lesbianism.)

These women are unwitting victims of a massive social engineering program designed to turn them into homosexuals. It is sponsored by the Illuminati central banking cartel.

They are the target of relentless propaganda in school and media telling them to find fulfillment in career (self assertion) instead of marriage and motherhood (self effacement.) This program has succeeded. These women are no longer feminine. They are mutants, neither male nor female.

Homosexuality is defined as arrested development caused by failure to form a permanent bond with a member of the opposite sex due to gender role confusion. It is characterized by having promiscuous, anonymous sex to compensate for this failure to mate, find intimacy and grow past the courtship stage. (See defining homosexual & heterosexual in this essay.)

In her book, "The Power of Sexual Surrender" (1954) psychiatrist Marie Robinson explained that a woman's identity (i.e. femininity) lies in self sacrifice, an "essential feminine altruism."

A woman's self-expression and power are based on making her husband and children her first priority. Similarly, her sexual satisfaction and spiritual fecundity depend on this self surrender.

Feminine women make themselves attractive to men. They build their life around their marriage. For a woman, 90% of love is trust. She surrenders worldly power to the man she loves in return for his power expressed as love. This is what women need for psychological and sexual satisfaction.

At the same time she empowers and nurtures a man with her love.

Masculinity is defined by power; femininity by love. Men want power; women want love. Heterosexual union (marriage) is the exchange of the two (power for love) consecrated by exclusive sex.

Feminism was designed by the Illuminati bankers to undermine marriage. It taught women to seek power instead of love.

Penis = power. Instead of seeking a man's power, feminism teaches women to grow a penis

Women became masculine. Both sexes competed for power and were sexually neutered. Instead of moving past courtship to marriage and family, they suffer arrested development, i.e. perpetual courtship.

Women seek the company of gays to justify their own gender confusion and avoid courtship. They have been indoctrinated to find men threatening but gays "fun." They avoid sex with men but find male male sex a "turn on," though real heterosexuals find it repugnant.

Unable to self efface or trust, they eschew the feminine role..

"With girl/guy couples there's always that role thing going, and I always think the guy could easily end up being a 'traditional' male (i.e. NOT good!) but with gay guys they're so equal and lovey!"

A woman's natural biological destiny lies through marriage and children.
Her husband provides and protects her and her children. Her family provides love and security in old age. She is part of the cycle of life.

The Illuminati bankers are Satanists, waging a covert war on humanity. They want to enslave us by eliminating marriage and family, controlling reproduction and education (indoctrination) from birth. They want us totally isolated and dependent on them.

Women have a relatively short window to marry and bear children. The bankers intend they should miss this opportunity by cultivating homosexuals instead of husbands. They pay a heavy price.

The promotion of "gay rights" and homosexuality disguises the real goal -- making homosexual norms dominant. We are becoming a homosexual society in the sense that we will have sex but not marriage or children.

About 5% of homosexuals actually marry. About two percent of the population is gay. Do the math. For 1/1000 people, they are redefining marriage, the central heterosexual institution. Get it?

The plan is succeeding. Witness that heterosexuals now gauge each other in purely homosexual terms, i.e. on desirability for anonymous sex, "hotness."

Everything has been reduced to the lowest common denominator. Nothing matters but sex. They want to dehumanize and degrade us animals.

Why do women love gay men? It's a sign of gender confusion and arrested development, i.e. homosexuality.

Thank you Mark for suggesting a great subject!!!
Next Article»«Previous Article
Comments: 0